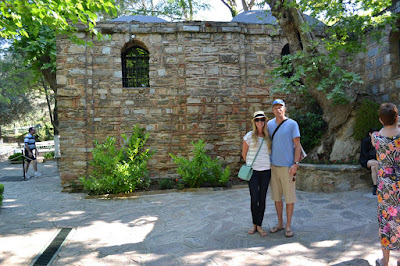 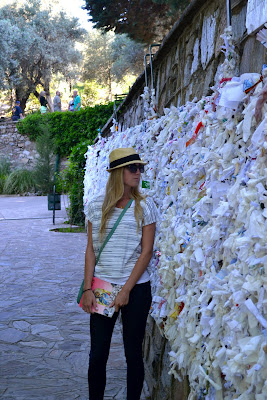 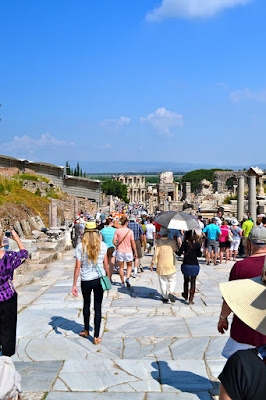 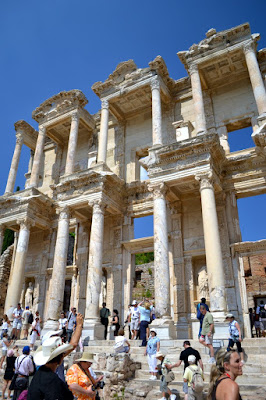 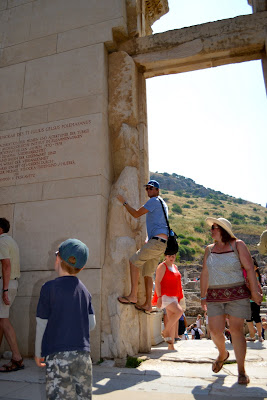 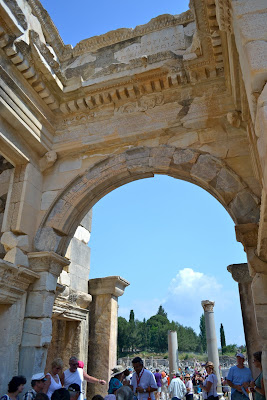 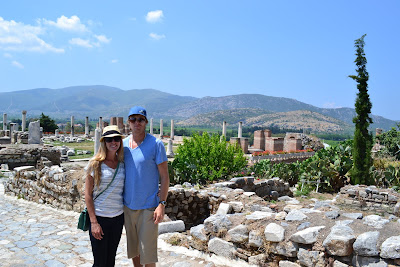 St. John's place. a barely visible mosque is in the background. 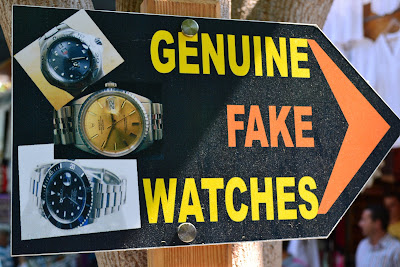 This day began a little, what should I say…..late? We had booked a tour through the cruise ship because we were only going to be in the Kusadasi port half a day (very short). We must have been really tuckered out from Athens, bc we didn’t hear our alarm and woke up about an hour after our tour group had left (non-refundable, great). We rushed out the door to get a taxi on our own – expensive, but a must with our now even more limited time.

The taxi driver was a young 24 year old turkey man (no wife) haha. He thought us living in California was pretty cool. He first took us to the site where it is believed that the Virgin Mary’s final resting place. It was very beautiful and peaceful – surrounded by a lot of greenery in the Solmissos Mountains. We filled up our water bottles at Mary’s fountain, which is legend to heal the sick and afflicted. It tasted normal, don’t know if I was in need of healing anything, but I participated.

Next we headed to the ancient ruins of Ephesus, a Roman province capital starting in 400 BC. The site is still under excavation – it is huge! And amazing how much has been preserved over time. The most impressive part was the Celsus Library – Warren wanted to literally climb the walls. The great theater that sits over 25,000 is where Paul stood and heard the full crowd shout "Great is Diana of the Ephesians" for two hours straight (Acts 19:34). The site was much more impressive than we had anticipated and totally worthwhile to check out – we were glad we paid the 24 year old Turkish man for an overpriced taxi tour. It was incredible to stand in these historic places and think back to what occurred in the same place at a different time..

We had just enough time to stop at the Basilica of St. John before returning to the ship. We really just kind of plowed through it since we were short on time. The site claims to have the tomb of the Apostle John – don’t know how that works with our faith of John still living today…. (John 21: 20-23)

Overall, it was a good and exhausting morning. We were back on the ship by 12:30 in the afternoon to get what else? A ton of free food and lots of sun, but no free soda (don’t bring that up to Warren – he was not happy about no free coke zero). We also decided to start ordering (free) room service for breakfast. BEST idea yet. We use it as a second wake up call, and then we didn’t have to fight the crowds going through the self serve breakfast line.