Resident retreat this weekend in big bear. It was raining in orange county so I was hoping for snow in the mountains, not so.

Didn't sleep much in our giant cabin of fun on friday but still managed to get up a little bit before 4 to get ready for a run up mount san gorgonio. I've been up there twice before but via the Vivian Creek trail, the cabin  was closer to the South Fork trail, which is another popular route, so I decided to head up that way. It's a little farther in distance but less altitude gain so maybe more runable.

Head lamp on it was go time a little after four. The first three miles were relatively flat then it picked up. I just went at a controlled pace. By six the sun was  coming up and trail opened up at the same time.

I ran into a short section where the trail was icy and then dropped off. I considered stopping but after a quarter mile it became manageable and then the ice disappeared all together. Approaching the saddle the wind picked up but the frost trees and views were too spectacular to pass up, even if my fingers couldn't feel the camera buttons kept trying to get decent shots.

I had a designated turn around time in my mind and before I left I had pretty much conceded that I probably wouldn't be able to make the top. Before I knew it I saw a sign where the Vivian Creek trail merged with my current trail and I knew I was only a quarter mile or so from the top, just before my previous wrong turn. This time I wouldn't make the same mistake.

I felt like a put my hand in the cookie jar and would get away with it as I sprinted (relatively) to the summit. I'd make it to the top and still make it back in time! I let out a primal scream for good measure and then took a few more pictures without getting blown over before heading down to warmer ground. 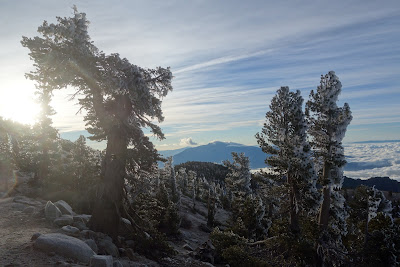 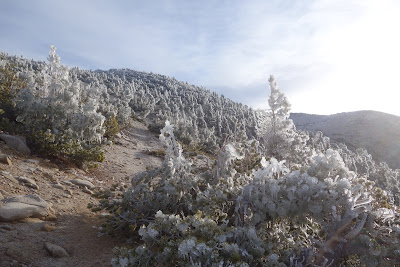 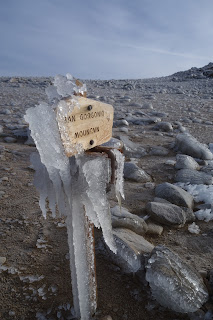 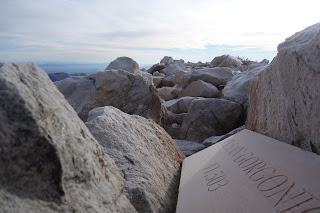