guard outside the palace 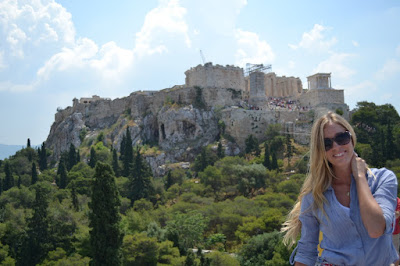 on top of Mars hill w the Acropolis in the background. the temple of nike is on the far right, just above E's head

the parthenon and other views on the acropolis

Whoa! This port totally took us by surprise! We got a taxi right off the boat for a good price (compared to what our “trusty” tour advisor had told us on the ship). It was only about a 15-20 minute drive to Athens from where we docked. The modern city was incredible – and HUGE! We were very impressed with it as a thriving metropolis. In the heart of the city sits Athen’s main attraction – the Acropolis, where one can find the Parthenon and Erechtheum. Luckily Warren and I are young and spry (especially compared to our senior citizen population on Ruby Princess) and beat most of the tour groups to start our audio tour (thanks, Rick). It is crazy what has survived since 400 BC, through all the wars, earthquakes and natural erosion. It was incredible to look at and experience.

Just below the Acropolis is a little rock outcropping called Mars hill, which also overlooks Ancient Agora. It was here that Paul chastised the people for worshiping lesser gods (Acts 17: 22-31). The passage has a whole new meaning when you consider he was speaking literally in shadow of temples and statues built to worship lesser gods.

After walking through the ruins, we spent some time in the Acropolis Museum, which was also A-mazing. Five of the six maidens whose bodies act as columns on one of the buildings, are housed there (the 6th one is in the Louvre). All the original sculptures from the Acropolis area are also in the museum and just replicas are actually placed on the site. The museum building is incredible. It is down the hill from the site, but is positioned the same, with all the artwork in the appropriate areas so you can gain an accurate perspective. The building also has ceiling to floor glass windows where you can see the Acropolis the whole time you are seeing the original art pieces.

We walked down a cobble street to the Plaka to have a traditional Greek lunch. We ordered tsatsiki (a yogurt and cucumber starter) along with Warren’s gyro and my chicken souvlaki. It was soooo good. And it was nice to sit for a second to rest our weary feet while being able to people watch outside on the eating patio of the restaurant.

After eating, we ventured over to the Temple of Zeus for a photo op (we couldn’t enter the site), and then continued our walk to the original Olympic Stadium which was built on the foundations of a 4th century BC arena and hosted the first modern games in 1896. (We did drive by the stadiums where some of the events for the 2004 summer games were held but didn't get to see the big stadium. bummer. only so much time). It was CRAZY to think about how old that place was and that it was still in tact. We did an audio guide walking tour that was only 4 euro (deal). It was interesting, but we were in and out. We met a (real) taxi driver who really wanted to talk to us (I think bc we are American?) who told us to head up the street to see the changing of the guards in front of the palace. We saw the guards with their funny outfits, shoes and walk and got some pics. They choose the guards by height, which another local informed us that Warren’s height would qualify him.

We headed back to the Plaka (shopping and dining area) through a city park (Warren’s favorite) and some other small streets to catch our taxi back to the ship. We were overall very impressed with Athens.

these pictures are INCREDIBLE!!! im sad JD and I couldnt make it. keep the posts coming!!