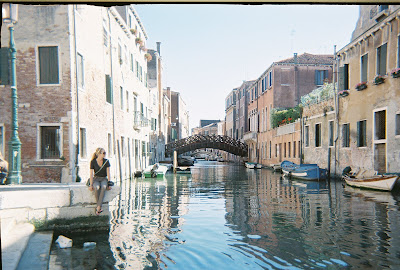 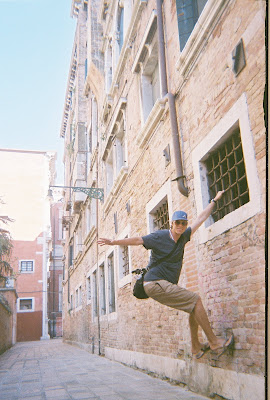 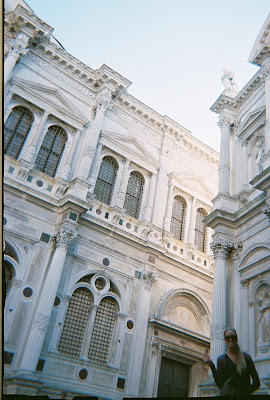 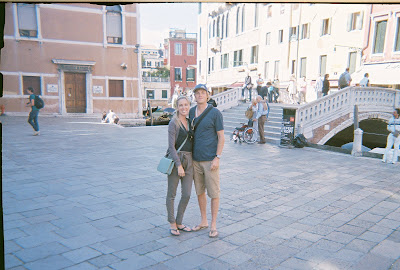 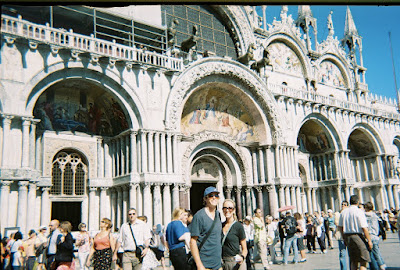 so...this will be the first of many posts to document our trip. i kept a journal while we were there, so feel free to read or skim and check out a few pics from each day. i will post a different port each day for the next 10 days or so.

today's post is the saddest. in the picture department that is. all the pics were taken with a disposable camera. if you read on, you will know why.

We arrived in the Venice airport late Thursday night to discover that Warren’s bag had not made our journey from LAX-Madrid-Barcelona-Venice connections (go figure, right?). He wasn’t too worried, as he expressed he would be fine wearing the same shorts and blue v-neck the whole trip and was happy that I had my bag (a true gentleman) but our SLR camera happened to also be in his bag. Whoops. At least we had our Cannon point and shoot. We were good to go.

We settled in at our Best Western “Quid” Hotel just a 30 euro taxi ride from the airport. We decided it was our best option considering we were arriving so late and a private water taxi to downtown Venice would be over 100 euro; and then, we would have to wonder the cobble streets to try and find a hotel that was several hundred euro more than our “Quid”. We must say – very happy with our choice.

The next morning we got an early start by running (more like sprinting) to catch the public bus just a couple blocks from our hotel. We missed it. But it was a nice wake-me-up. When the next bus arrived we were happy to stand and see the streets in the more modern Venice. We had been on the bus about 10 mins when we hit an unforeseen traffic jam. Turns out there was a strike of some sort (apparently these are common in Italy) and no cars/buses were able to get through. A nice Italian student told us we should just get out and walk to the train station. So we did. I don’t know if it was luck that we found it, but it wasn’t too bad. We were happy we did get an early start because our journey was a little more time consuming than we had planned. The train only took about 10 mins or so, and then we arrived to the Ferrovia Train Station. Walking out the front steps seemed a little chaotic. It is right on the Grand Canal with large and small boats going both directions. There were a ton of tourists. We found a booth to buy the vaporetto (public boat transit) ticket. We found the vaporetto system fairly simple to navigate and that we also just shouldn’t have bought a ticket all together. They never checked them, and people just got on and off as they pleased. Needless to say, that was the only day in Venice we bought it.

We started our “touring” of Venice by taking the vaporetto down the outside of the Grand Canal to St. Marks Square. We started with a short line to St. Mark’s Basilica, where the Apostle, Mark, is entombed. Walking in the Basilica is breathtaking. It is massive. We had a walking audio tour (thanks to our friend Rick Steves and his FREE pod casts). It made it much more interesting to know what we were looking at. We paid the 2 extra euro to go to the back of the Basilica to see a gold/jeweled mosaic type of art and the tomb of Mark. We then headed up some steps to see the ceiling artwork at a closer glance. We saw 4 bronze horses in this part of the museum as well as many tapestries and artwork. The BEST was the view from the top of the Basilica into St. Mark’s Square.

Next we headed to Doge’s Palace (right next to the Basilica). This large building is where former rulers officiated for hundreds of years. There was also a prison that we toured underneath Doge’s Palace through the very famous, Bridge of Sighs.

We wandered to narrow streets to find “sandwich row” and got paninis, which were fabulous and the atmosphere and crowd seemed to be authentic. We decided to do the “official” Grand Canal audio guide tour from our pro – Rick. It was a bit difficult with people getting on and off and we couldn’t really see anything, so we ended up getting off at the famous Rialto Bridge. I don’t know why it is famous exactly – there are a ton of bridges that look exactly the same in Venice, but we didn’t ask questions, just took a pic.

For dinner we took some advice from our good friend – Rick Steves. He suggested this cute canal-side restaurant (within walking distance of St. Mark’s Square) called Trattoria da Giorgio ai Greci. When we arrived there was not a table in sight, but this thick accented jokster told us to wait just a few minutes and he TOTALLY got us in! Rick’s book mentions the owner’s son, Roberto, who is a chatty server. After the jokster sat us, I asked if he was Roberto, and sure enough – it was! I told him he was famous and he said he knew Rick had mentioned him. I am convinced he got us a table bc he saw the book in my hand – gotta love Rick. We ordered big. It was awesome. We started with bruchetta, then penne pasta with garlic and basil – it was A-mazing. Then the main course was absolutely to DIE for. We got a baked flounder in this amazing sauce and some roasted potatoes. By far – my FAVORITE meal of our entire trip.

The weird thing about Venice – it had a “disnelyland” type feel. From what we read, the population of locals is slowly dying and the average age of a resident is over 65. It is a very inconvenient city to live in, so I understand that people wouldn’t necessarily move there. Maybe there will be some sort of revival, but with how things are going, it seems Venice may be a floating museum in the next 50 years. It was all very beautiful and picturesque, but just was not authentic. The BEST part is at night when a lot of tourists leave and you can get lost in the very narrow low-lit canals. We took a very expensive gondola ride at night, which was the BEST time to tour.

We caught the very last vaporetto of the night from St. Mark’s Square after listening to the battling orchestras in the square. The train took us back to station where we got a (fake) taxi back to our hotel. I say fake, because it was just some guy and his friends pretending to be taxis outside of the train station, then when you get to their car, it is just some unmarked Honda without a meter. Whatever. He totally ripped us, but we made it home.

It wasn’t until the next morning that we noticed that our point and shoot was missing. Warren thought it might have fallen out of his pocket in the “taxi”. My pessimistic side is convinced that he was pick-pocketed by our “cab driver”. Whatever happened – it was gone. And so were all of our pictures. Keep in mind our SLR camera is in Warren’s luggage, which had STILL not arrived. By this point, I am totally convinced that the airline has lost his luggage (including our camera) and that we had been victims of petty theft. I insist that we (walk) through the streets of modern Venice (where no one speaks English) and buy a new point and shoot to have for the duration of our trip. We find one, but it has a European plug and we were checking of our hotel to head to our ship with American plugs – quite the conundrum. We also purchase an old skool disposable to use on our second day in Venice (we will see how those turn out, haha). We got some strange looks from people we asked to take a picture of us that day.

After purchasing the camera we called a cab to take us to the ship and drop off our bags. It was a quick trip and the ship provided a boat shuttle from the port back to St. Mark’s Square.

We spent the day just wandering about, which we really enjoyed in the less crowded areas. We spent some time near the Frari Church (hoping to tour the Franciscan church, but there was a wedding happening – expensive!). We journeyed over to the Jewish Ghetto to spend the evening and watch the sunset (which happens late – like 9pm!). We had dinner in the outdoor seating of a pizzeria restaurant where the server told us he had the “best pizza in Venice!” And he was right! Although I ordered gnocchi, the pizza Warren had was amazing. The other thing about eating in Italy is that is such an experience. The servers take their time. And you ALWAYS have to ask for the check.

We stayed in St. Mark’s Square listening to the dueling orchestras until it was late and we were exhausted. Touring an only walking town is tough! Our feet and bodies were just worked-out. We were gonna sleep well. Oh – and we had gelato in the square which was amazing (mente is the BEST) and Warren was so cute and had me take a dancing picture with him (yes, on the dispos) bc I kept saying how I wanted to dance in the square (that pic did NOT turn out - haha).

The night got even better when we arrived back to the ship to find that Warren’s bag had been delivered to the port. Iberia Airlines pulled through. AND our SLR was intact – I was very happy.

This is fun to read. Next time you go. I'm coming.