maybe she shouldnt have "Gimme More"d. 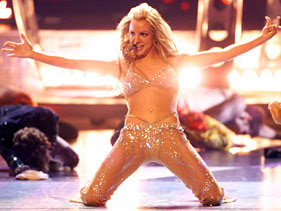 Oh Brit. I had such high hopes for her to open the VMAs tonight. I mean, no one is bigger believer in Brit than I, and I thought for sure she was going to have a sweet comeback tonight. Bless her. It was painfully embarrassing to watch her awkward hip gyrations and zoned out drugged face do sub-par choreography and lip sync her way through one of the worst performances I have ever seen. I posted this picture to remind us all of better days. They days where Brit ruled the world. I miss those days. Her single is awesome, but maybe she needs a vaca before trying to take back her Pop Princess title.

saddest thing ever. ok..maybe not ever. but she could've at least covered her stomach. and maybe worn a wig instead of those terrible extensions. she probably had to get drunk before so she could bear the mean things that were said by that idiot lady after.

could you even call that dancing? my favorite part were p-diddy and fifty cents expression..you could tell they were thinking what the he**. haha hilarious, poor britany. i believe this perormance truly marks the end, oh well

I love that we are on the same wave length! See my post for my thoughts and reactions as they are very intense. haha

It was very very hard to watch. I miss the old Britney as well. Poor little gal.