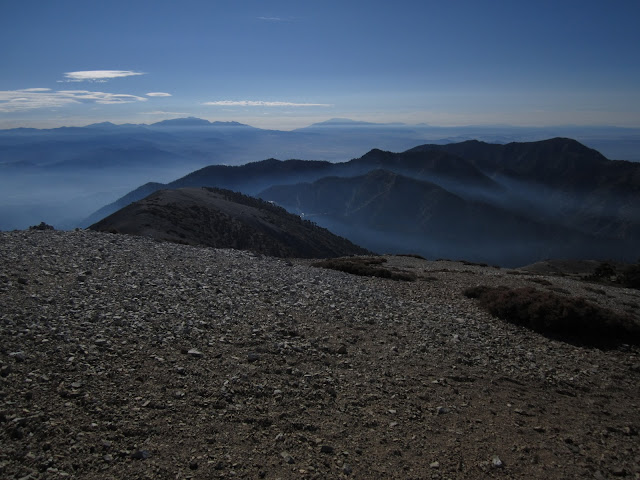 I had labor day off so decided to head to the mountains. A few weeks ago I was talking with a coworker and realized Mt Baldy is only a little over an hour away. With the peak just over 10k ft, this makes for a very tempting training run.

I've been looking at fkt's for california. Just because I want to see where I'm at and maybe because I have some friends who seem to always try and accomplish speed attempts that I figured I'd at least see how I stack up.

The route is a little different from the one I took when completing "Los Tres Santos" but it was the route that seemed to have the fkt on it. I figured I'd do some reconaisance work, and just give a solid steady effort.

The Baldy Lodge was closed, but there were people inside and they were nice enough to let me use their facilities. They wished me good luck on the run - I guess there's a race every memorial day, but luckily it was going up a different route (the same one I did last year).

After a five minute warmup walk up the hill and back down to my car I was off. Maybe a little too fast, it took me a minute to catch my breath. After the first half mile or so the paved road turns to single track hard packed dirt great for running. Immediately I liked the single track trail much more than the moker flats fire road. As the switch backs kept coming I just kept pushing at a steady workout pace. 22.17 where you cross the creek, which I believe was right on time. Encouraging.

Then it got steeper and I hiked at a steady pace. When I got to "The Narrows" I figured I was at least thirty minutes off the fkt. The steady hard push is still a thing that takes training, it's easy to get comfortable, which is what I did and figured under 2 hours for my first go would be all right. 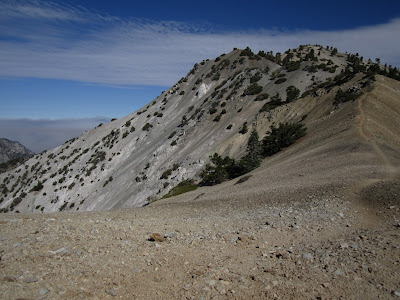 Heavy smoke settled in about 2/3 of the way up. I heard about the Angeles Forrest fires on the radio on the way up and now I was experiencing them. I used my shirt as a smoke filter and figured my training on the beach running past all the campfires was good training (or just further lung insult?). After ten or fifteen minutes or so I was above the smoke, glad I didn't turn around prematurely. 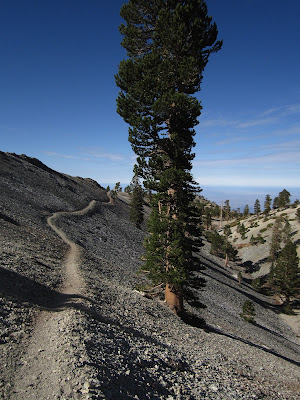 At the top I was met by a handful of aiders and spectators for the race. I walked around and took some pictures. I even bummed a couple cups of water seeing as how I went through my 1L on the way up and waited around long enough to see the first two guys come in before heading down. I wish I brought more than one cliff bar, the extra weight wouldn't have killed me, but oh well. 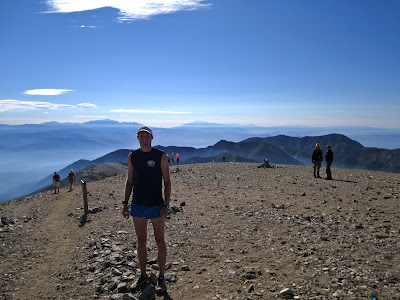 The way down was uneventful, the smoke had blown to the east, although it was a lot more steep than I remembered. I was never able to get into a good stride, just found myself on the brakes the whole time taking too short of steps. Again, downhill stuff seems to be one of my weaker points. I came down in around 70min, which was almost 20min slower than even some of the "casual" downhill attempts I saw posted. 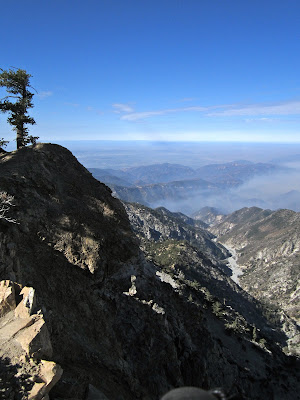 About one hundred feet from the end of the trail I fell. Just got lazy I suppose. It was pretty frustrating, it wasn't like I was bombing the hill and making really good time. Probably lucky to walk away with a scraped forearm and knees.

I'm glad to see your representing BYU. Thanks for taking pictures and posting.