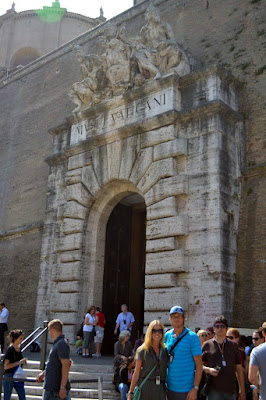 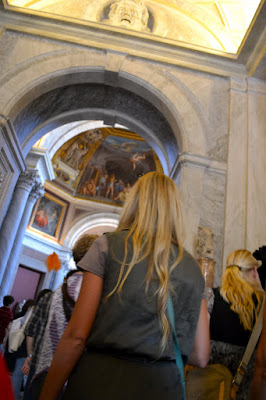 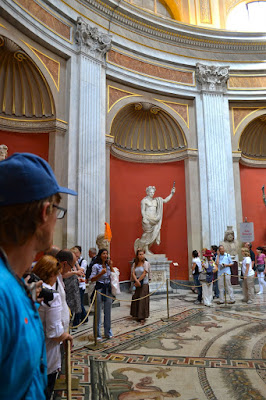 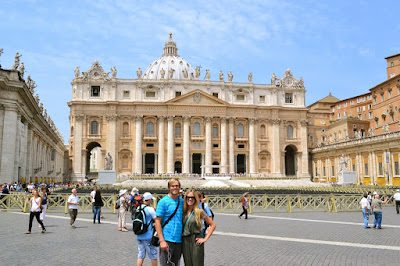 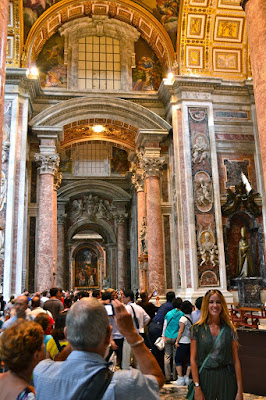 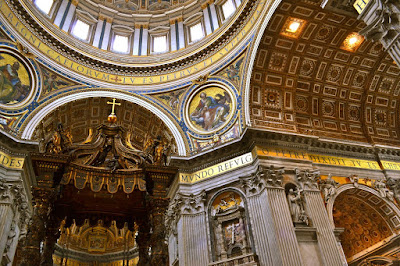 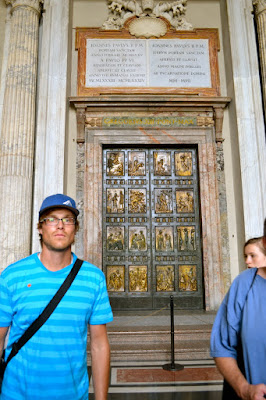 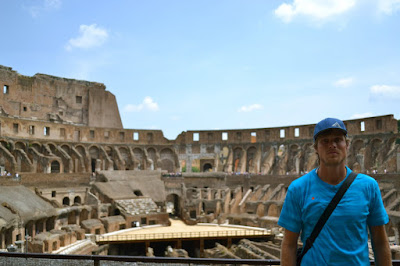 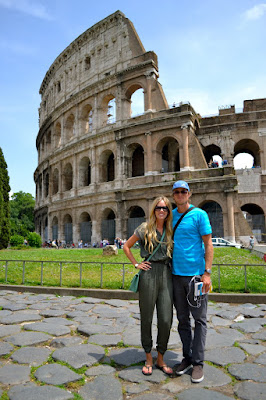 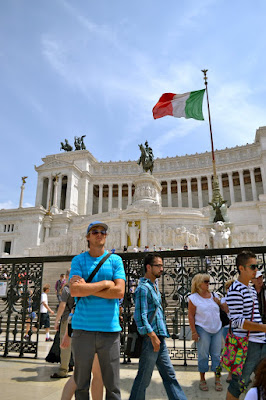 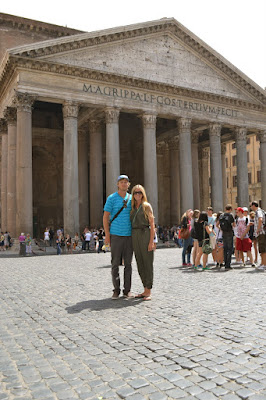 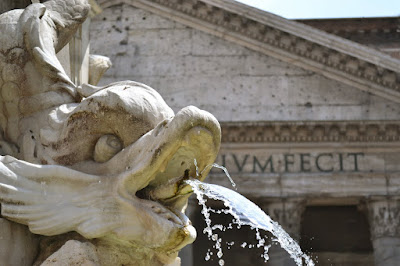 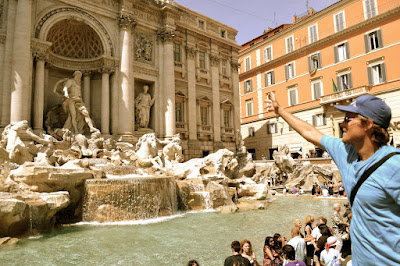 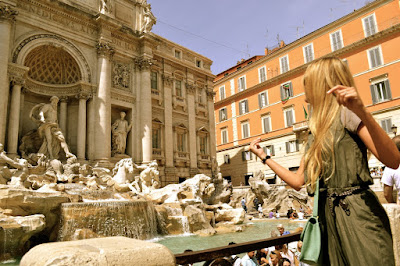 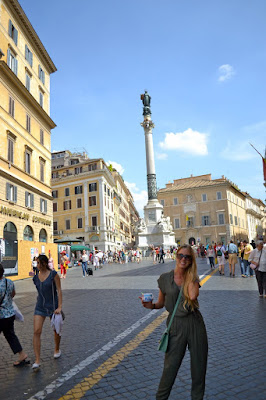 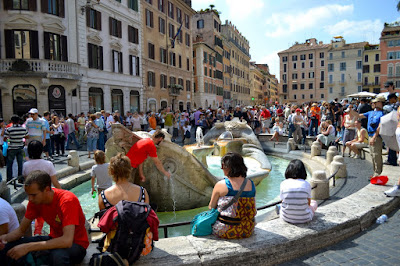 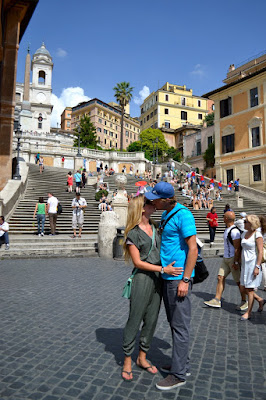 warren's idea, in the most "romantic" part of rome

Rome. In a day. Talk about crazy. And exhausting. We were off the ship first thing and lucked out that the shuttle bus left 15 mins earlier than it was scheduled. We caught a train from Civitavecchia to Rome in about 2 mins after arriving and were on our way. We had received a lot of conflicting info from people and Rick, so we took advantage of the 45 min train ride to figure it out.

We decided to start at the Vatican Museum, so we got off at the first stop into Rome. We arrived a half-hour before the museum opened, and there was already a 1.5 hour wait. Then we got swindled. We agreed to a tour that was supposedly starting in 20 mins, where we could skip the line. Turns out by the time we actually got into the museum, it had been almost 2 hours. What a rip. But having the guide was nice. She shared some interesting info, and we moved fast. The place is massive and they suggest 4 days to cover it all. She basically walked us down the main large hall with the sculptures, maps and tapestries.

Then we entered the Sistine Chapel – which was incredible. It was crazy to see work of Michelangelo on such a great scale. Something interesting she told us was a story about a Cardinal not liking something about his work (I think it might have been all the nudity, which fyi clothes were added later to his painting and fig leaves were added to many of the sculptures) and Michelangelo did NOT appreciate. He made one of the faces of a person in hell the face the of the Cardinal. When the Cardinal asked the Pope to have Michelangelo change it, the Pope responded something like, “sorry, I don’t know anyone in hell to help you.” It was just amazing to see the ACTUAL stuff that you see copied all over the world since you were a kid. It was awesome.

We went through a side back door (short cut) to enter St. Peter’s Basilica, where St. Peter was martyred and buried. It was ginormous. Seriously huge. Its difficult because we took pictures of these amazing buildings, but it just doesn’t do it justice. Everything was so grandeur and detailed.

We caught a cab to head over to the Colosseum, where we listened to one of Rick’s walking tours, which made it much more interesting. I cant believe there used to be games to the death, or that they would throw wild animals in with a slave and people would cheer and watch them die. How barbaric. And disgusting. The building itself is impressive to see what is left of it, but I just couldn’t get over what had gone on there.

Next we headed to the Roman Forum, which was right next to the Colosseum. We had purchased a Roma Pass which got us into both places skipping the lines. We didn’t know much about the history of the Forum, so we did a brief walk through then decided to take a stroll down the street to see a sweet building called Victor Emanuel Monument. This was Warren’s favorite building in all of Rome. He loved the statue on the top.

We grabbed another cab to the Pantheon, which is one of the best-preserved monuments in that not much has been changed or had to be preserved since it was built over 1800 years ago. It is a concrete dome, which many other buildings have modeled its architecture after. We thought that the fountain in front was the Trevi Fountain, so Warren filmed me tossing a coin in for good luck. Total tourists, right? Except that it wasn't the Trevi, it was just some random. So we followed our map a few blocks to see the real thing – which was much more impressive. Here we both threw in coins. What? When in Rome!!! Now that line is appropriate :-)

We enjoyed some gelato (I always ordered mente) as we strolled to the Spanish Steps. It is claimed to be the most beautiful steps in Rome, designed in the Roman Baroque style and is considered a romantic spot in town. We took a kissing pic. :-) Men walk around with roses and literally put it in your hand, wedged between your fingers and then ask your beau for money. It was ridiculous. We did not participate, and I always handed it back to which the man would turn really grumpy.

We made it back to the train station to RUN all the way to the track to miss it by 2 mins. We got on the next train 20 mins later and met Eugene and Andy – a gay couple from Miami who ate at a table near us on the cruise. They said they saw us running to the track and followed suit. We sat and talked with them the whole way back. When we got back to the port, pretty Princess had stopped running the shuttle service, so we had to stow away on another shuttle bus and pretend like we didn’t understand when they were shouting, “no princessa!” The bus stopped at the ship next to ours, so we made it back safely and just in time with our new friends.