ok ok. i know i have been totally delinquent in my blogging, but now that i am making a few posts - no complaining on the sappiness!

warren and i were in nashville for one of his residency interviews at vanderbilt over our anniversary. i didnt know what w had up his sleeves to celebrate our one year, but wow. this man has surely stepped up his game since our first date to a sunday night fireside and a second date to yogurtland (which we still frequent).

so - from this point, i didnt know any of this happened: warren began researching "best steak houses" in nashville. of course ruths chris came up (also one of our favs...mmmm...the creme brulee is to die for!), along with some other sort of chains. but warren wanted something more unique. he happened on a place called the standard in downtown nashville. it is the only remaining grand townhouse built in 1840 left in nashville. it has been bought by a few different families over the years, and has been the place for supreme society clubs where only members can attend. warren emailed the manager of the mansion, to which he responded they were hosting a wedding in the ballroom that night and would not be able to accommodate us. w was back to square one. then, a few hours later he received an email from the owner of the mansion, who also lives in the house. he said he had heard it was our anniversary and we were traveling from california. so he would like us to come to his residence as his personal guests and he would make dinner accommodations for us in the private club section. what??!! w was sooo stoked.

i still know nothing about all this. just know that we are going to dinner somewhere downtown and that i had to wear a dress. we show up to this place that is a total antique in the middle of downtown nahsville. we valet and head inside to find a wedding going on, where the girl at the front invites us to sign the guest book. w tells her we are there to see josh and she replies, "oh - the davis' right?". i am looking around like....what is going on???!!!! this guy in a 3-piece suit walks down the stairs introduces himself as josh and invites us up the stairwell, through a pad locked door to an ole time cigar lounge with boxes labeled "senator smith" and "doctor thompson"...etc etc... He shows us around the private club, library, bar, outdoor party area and finally to our own private den (complete with couches, fireplace and art work). there was a table set up in the room just for us! josh apologized that he had to leave so soon, as he was attending the governors ball, but introduced to our personal server for the evening. i am just floored at this point. this all was just old, glamorous, southern hospitality (or how i imagine it to be anyway). the food was absolutely incredible, and so surreal that it was set up just for us. 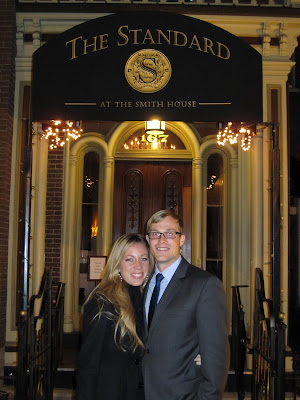 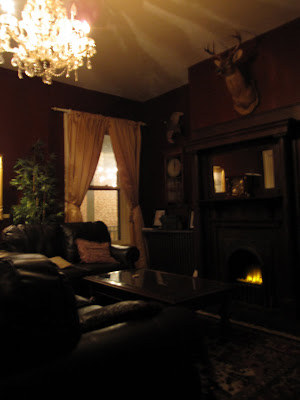 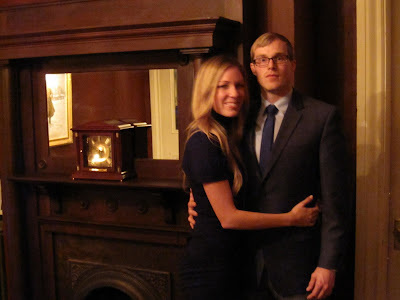 WOW, wow, wow! Go, Warren (and Josh!) This is like something out of "The Bachelor," no?